In the UK, we’ve made plastic recycling at home far too complicated. If you find it confusing, you’re not alone. Half of all families said they’ve argued in the past with a loved one about what can be recycled. 25% said they argue about it every month.

Plastic recycling is far too complicated

There are 39 rules for what can be put in plastic recycling bags at home, and they differ by post code. Get it wrong and the plastic will be rejected by the recycling plant and it will probably go to landfill.

Here’s a sample of the rules:

Have you ever placed any of those things in your recycling bin?

Of course, we all have by accident, because the rules are far too complicated.

What if you always sort your plastic recycling carefully?

Okay, but let’s say you’re some kind of plastic recycling sorting genius, and you have a binbag full of perfect, clean and clear recyclable plastic. Let’s call you Theresa.

And let’s say your next door neighbour is a fast food junkie and easily confused by rules, and he just throws all his plastic waste in a big bag. Let’s call him Donald.

Where does Theresa’s waste plastic go, and where does Donald’s?

Well, they’re both going overseas, because our local councils sell our waste. Until recently to China, Malaysia or Vietnam, although they’ve got too much waste of their own and since last year have refused to take anymore. So maybe it’ll end up in India or Thailand. And one day soon those countries will also refuse our plastic waste.

The waste will be purchased on an open market. Theresa’s good, clean plastic will be sold for a nice profit of £375 per tonne.

Donald’s greasy, contaminated plastic, well, they’ll have to pay the recycling plant to get rid of it. It makes a loss of £100 per tonne. It’ll be burnt illegally or dumped in a huge landfill secretly.

And because the UK’s rules are so complicated, unfortunately most of the UK’s plastic waste is Donald’s type. So much so that some local councils want to stop home plastic recycling all together now.

So why do we recycle plastic, if most of it is burnt or dumped?

Well, we were told to recycle plastic. And we all want to – of course we do. We know we use a lot of plastic, but it’s so useful. It’s airtight, watertight, light to carry and keeps food fresh.

Recycling plastic seemed the perfect solution. We could use this very useful material, and then re-use it again and again.

But we’re learning it’s not so easy after all.

When I was little Kitkat chocolate bar wrappers were foil and paper. I used to eat ten of them every day, and it never did me any harm! Now they’re shiny plastic. Milk was in glass bottles. Fish and chips were wrapped in paper. 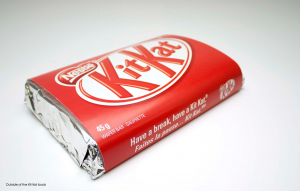 Oil companies are losing money as we shift to electric cars. Plastic is their newest growing market. They want us to use more and more plastic so they can keep selling oil, and that means more plastic products. To sell us this plastic dream, they have to convince us that plastic can be easily recycled and that we don’t need to worry about using more and more plastic. Essentially, they use the concept of recycling to convince us that plastic is guilt-free.

The solution for plastic recycling?

The problem is that most plastic – 87% of it in the UK – doesn’t get recycled, despite hundreds of millions in recycling infrastructure. We don’t need to be afraid to say that we made a mistake, because there is a solution – and it’s much easier than the 39 current rules for plastic recycling.

Let’s not use single use plastic in the first place. Let’s go back to using paper and foil and cardboard again.

If manufacturers do want to use plastic, let’s make them use the most easily recyclable version. Let’s force them to homogenise plastic types, so that it’s all the same plastic type.

And let’s make them track that waste plastic to make sure it doesn’t end up in landfill, or even worse, in our oceans.

Because the reality is that right now there’s no such thing as clean plastic. It blows across our streets, it sits in holes in the ground, or it floats on our oceans as far as the Arctic Circle.

The era of plastic recycling is over. Let’s use less of it in the first place, and then we won’t need to worry about where it goes when we throw it away.